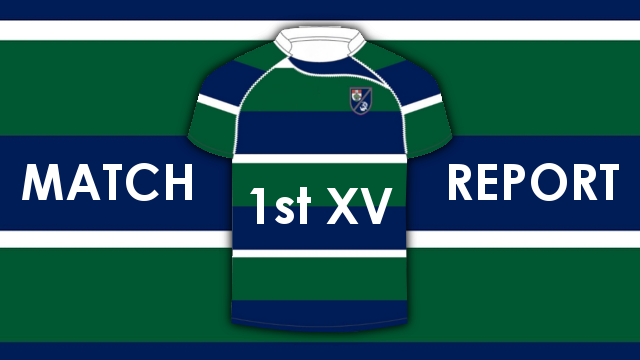 The two teams went into the game after contrasting results in their opening fixtures. GHK were looking to continue their blistering start to the season after two handsome victories against Gordonians and Hamilton. Though Accies were yet to register their first win, a narrow loss to Preston Lodge and a tough defeat to likely title contenders Newton Stewart did not mean they were a bad side. Please forgive the cliché but form tends to go out the window in derby games and this fixture has traditionally produced closely fought, turgid affairs. Accies in the rain and under the Friday Night Lights would surely be the biggest test for GHK so far this season.

And so it proved. The opening 20 minutes were cagey as the slippery conditions made it difficult for both teams to establish control of territory and possession. On his first start for the 1st XV this season, Scott Davidson showed glimpses of his attacking prowess down the left touchline. Danny Campbell was getting his hands on the ball and made a couple of trademark breaks from counter attacks. The first (of a few) cards was shown when the Accies winger, clearly aware of the threat Campbell posed, was a bit too eager when chasing a kick and took the full back out in the air on the halfway line. GHK did not take long to make the extra man count as Campbell slotted a penalty in front of the posts. Shortly after, he scorched through the heart of the Accies defence to score a stunning try and added the extras to extend the home side’s lead. GHK were soon on the offensive again. Craig Gossman made a brilliant break in the middle of the pitch. The ball was recycled quickly and then a slightly fortuitus pass from Eddie Waller put Gavin McKirdy over in the corner. 15-0 at halftime.

Accies came flying out the blocks in the second half but were frustrated by the resolute GHK defence and couldn’t turn their pressure into points. This frustration began to spill over and the game was littered with stoppages for players getting to know each other a bit better. Red cards were given to both Gossman and an Accies player for their off-the-ball activities. There were a few moments of genuine class though and Angus North was normally involved. The centre was a constant nuisance in defence; winning penalties and putting in some cracking hits. But it was in attack that his most important contribution came; a thirty-metre break, a side-step around a certain former Scotland international and an offload to Waller who scored in the right-hand corner in front of the roaring crowd. Ben Frame almost added another score from the resulting kick off after a lovely run from Matt Smith but the captain couldn’t quite make it. In the final ten minutes Accies threatened to breach GHK’s defence but to no avail.

Another great win for GHK. To keep any team scoreless in rugby is no mean feat and the team will take a lot of satisfaction from preventing their rivals from getting on the scoresheet. Bragging rights secured until we meet again in January.

There were a few notable performances from players that stood up to the pressure of a derby match. The aforementioned North was excellent with and without the ball. Steady Eddie Waller, making his first start of the season, remained composed throughout and had a few classy touches. Tommy Spinks did not shy away from the challenge of playing against his former club and put in a great shift. However, the Edinburgh Gin Player of the Match goes to Danny Campbell. He kept the scoreboard ticking over with the boot, took his try well and was a consistent threat with ball in hand, especially in the first half. Well done Danny.

Friday night just got better and better for Danny as he became a proud father for the third time. New son Duncan and wife Mel both well. See you at training on Tuesday, Danny!