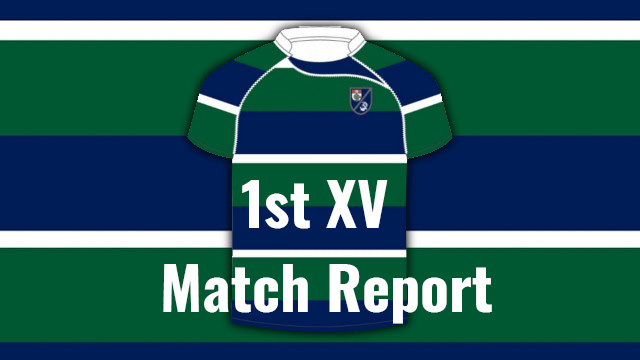 A league season that started with a fair degree of doubt as to whether it might actually be concluded due to Covid etc finally came to an end with GHK hopping across the fence to take on the Accies.  As ever it was a feisty encounter that provided plenty for both sets of fans to get excited about. The ultimate outcome of a tied game was probably just about right.

The home side had the edge in possession and territory, but in outscoring the hosts by three tries to one GHK demonstrated that they had the ability to turn good positions in to points.  They just didn’t get in to those positions as often as they would have liked.

Accies kicked off attacking the clubhouse end. They started very brightly and took the game to the newly crowned National Two Champions. It was an uncomfortable first ten minutes or so for the visitors, but having defended the early onslaught, GHK took the lead with their first foray in to the opposition twenty two. The ball was moved through the hands first right then left whereupon a deft nudge through by Ben Frame was pounced upon by Ben Hutton for the opening try. Jack Steele’s conversion hit the post.

Play resumed with Accies taking the fight to GHK. After eighteen minutes the home side were awarded a penalty that looked close to straightforward. However, the kick was pulled wide much to the disappointment of the Helensburgh Drive Stand entourage. GHK rubbed salt in that wound by claiming try number two. Again it was skipper Ben Frame who created the break sending Craig Gossman over in the right corner. Ten nil to the OA men after twenty six minutes.

GHK did not/were not allowed to push on and build on that useful lead. Accies kept at it and opened their account after half an hour via a penalty. In the moments that followed Ben Frame was yellow carded for an infringement, possibly a deliberate knock on/slap down? In reality it had been a half where  there seemed to be an awful lot of penalties and that did not help with the flow of the game. So, a seven point advantage for GHK at the break.

Turning round with a bit more of a breeze at their backs GHK might have fancied their chances of building on their lead. In the event it was Accies who scored their only try three minutes in to the half. A well worked move saw their left winger touch down. The conversion was missed but momentum was with the hosts and it was no great surprise that they edged ahead via another penalty as the game moved towards the final quarter.

GHK responded well and at last found some decent field position. A line out on the GHK left was taken safely by Hugh Parker. The drive by the GHK pack was thunderous. Feargus Haston had the honour of grounding the ball and claiming GHK’s third try. Jack Steele added the extras.

Not for the first time in the match back came Accies, and whilst there was perhaps no great threat to the GHK line in terms of a try, the tempo and direct approach of the home side did indeed apply significant pressure to the Champions. A further Accies penalty made it a three point game, and with the clock almost in the red zone another penalty award gave the home side the chance to kick for a draw or go for glory? The three points were taken and whilst there were a couple of flutters in the time remaining there was no further scoring and somehow a draw looked and felt about right.  Accies 17  GHK 17

A game that did have a bit of an ‘end of season’ feel about it. That’s possibly because it was the end of season. Anyway, the usual competitive encounter with honours even on this occasion. Well done to both sets of players for entertaining the large crowd that had turned up to see the battle of the Annieslands.

There did seem to be an awful lot of penalties in the game. These were pretty equally spread between the sides so it is not as if one side was deemed to be offending significantly more than the other. It may be that referee Mary Pringle’s task was not helped by the similarity of the strips? There were an awful lot of blue and white (with a smattering of green) hoops out there. Perhaps next time someone could bite the bullet and pull on their change strip? Just a thought.

A marvellous season for GHK. Thanks and well done to all the players, coaches, physios, sponsors, President Dave, the Committee, supporters, Cammy the Chef and his team…..everyone played a part. Onward to 2021-22!